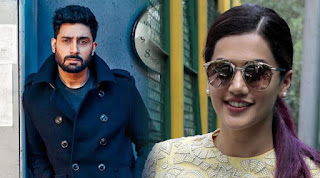 Earlier, it was reported that Abhishek Bachchan will be seen in the film Manmarziyan. The film was earlier offered to popular Malayalam actor Dulquer Salmaan.
The shooting of the film will begin in Kashmir in February 2018 where they will shoot the first schedule. Abhishek Bachchan and the cast and crew of the film will be going to Kashmir in January 2018 and will begin the preparations. As the makers want to capture the snowfall, the first schedule of the film will be shot in the beautiful place.
In the film, Junior B will be romancing actress Taapsee Pannu. For the film, Abhishek and Taapsee will be shooting a romantic scene in the snowfall in Kashmir.
As reported by a leading tabloid, a source stated, “There’s a snowfall sequence that needs to be shot. Some portions will also be shot in Delhi.”
The project Manmarziyan has been going on for a long time. The initial cast of the film included Ayushmann Khurrana and Bhumi Pednekar in the lead and was being helmed by Sameer Arya. Later on, Ashwiny Iyer Tiwari was made the director of the film. Post her exit, the film will now be an Anurag Kashyap directorial and will be produced by Aanand L. Rai.
The source also said, “Abhishek has signed on the dotted line. Once Anurag is done with Sacred Games, he will start filming Manmariyan.”
Along with Abhishek Bachchan and Taapsee Pannu, the film also stars Vicky Kausal in a vital role.

I have been thrown out of a movie and replaced by the actor or director’s girlfriend, reveals Priyanka!

Ranbir Kapoor opens up about dating with Alia Bhatt!

BOLD CELEBRITES AND THEIR CRAZY LOOKS