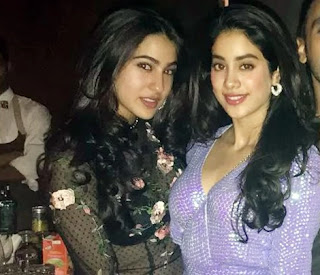 By On Jul 18, 2018
0
Share
Debutant actress Janhvi Kapoor is on a promotional spree for her debut movie, Dhadak with co-star Ishaan Khatter. The movie is scheduled to release on July 20, 2018 and Janhvi and Ishaan have been visiting numerous cities and intermingling with the viewers. They have promoted the movie in Delhi, Chandigarh, Kolkata and Ahmedabad.
Janhvi talked with a daily and clarified reports of her signing her second movie. When questioned is she has signed another movie, Janhvi revealed, “I have heard that rumour. But no, I am not doing any south film. At the moment, my priority is Dhadak. I am concentrating on promoting my first film before taking on anything else. That is the only movie on my mind.”
Debutant Sara Ali Khan will be making her Bollywood debut this year. Sara has signed Kedarnath and will be launched in Bollywood by director Abhishek Kapoor. She stars in Kedarnath with Sushant Singh Rajput.
Sara has also signed Rohit Shetty’s movie with Ranveer Singh, Simmba. When questioned about Sara and if there is rivalry between them, Janhvi revealed, “There is no competition. I am looking forward to watching her films as an audience member. She holds great promise and I think women should support each other.”

Aishwarya and Aaradhya’s smiles are noticeable after Abhishek to join vacation in Paris!

Rajkummar Rao and Mouni Roy to become husband-wife for their next Made in China!