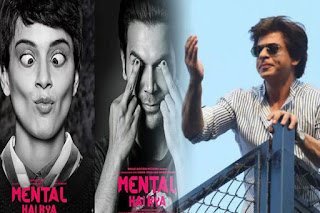 Superstar Shahrukh Khan doesn’t have any lead roles in his kitty after Zero but there’s buzz he’ll have an extended cameo in one of 2019’s most highly awaited releases.
It seems SRK will make a guest appearance in Kangana Ranaut and Rajkummar Rao’s Mental Hai Kya, which tells the story of two people who go a little crazy when their relationships with other people don’t work out. The Prakash Kovelamudi film also stars Jimmy Shergill, Amyra Dastur and Amrita Puri in key roles, and it’s definitely high on my list of films to watch!

Michelle Heaton – Outside the London Studios –…