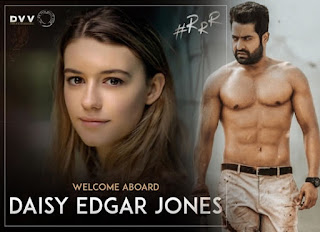 After giving epic Baahubali 2 in 2017, director SS Rajamouli is going to return with yet another big movie. Titled as RRR, the movie will have actors like Ram Charan and Jr NTR in the lead roles. Recently, the team of RRR took to their Twitter page to pronounce the entire cast of the film.
While Ram Charan and Jr NTR will be essaying the male leads, one of the female leads is being played by actress Daisy Edgar Jones. The official Twitter page of RRR shared this exciting news and wrote, “Welcome, @DaisyEdgarJones to the Indian Cinema! Happy to have you play the female lead in our film. Looking forward to shooting with us #RRRPressMeet #RRR  @ssrajamouli @tarak9999 #RamCharan @dvvmovies @RRRMovie.”