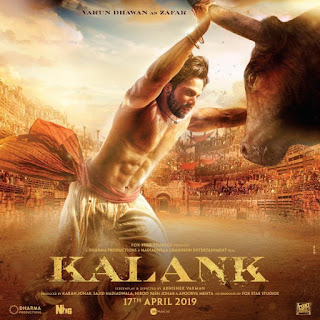 Now, Varun Dhawan is all set to win our hearts this year with the period drama titled Kalank. Helmed by Abhishek Varman, the film also stars Alia Bhatt, Sanjay Dutt, Madhuri Dixit, Aditya Roy Kapur and Sonakshi Sinha in the lead roles. Recently, the star cast and producer Karan Johar disclosed the teaser of Kalank.
This period drama is a love story set during the partition era. Varun Dhawan plays the character called as Zafar and from what we saw in the teaser, the actor has donned a totally different avatar for the movie. Zafar looks physically strong and the fans are in love with Varun’s rough and tough side.
Recently, Varun Dhawan shared a new poster of the movie. He captioned the poster, “An iron-hearted man with an unapologetic attitude. Watch #Zafar’s story on 17th April. #Kalank @duttsanjay #AdityaRoyKapur @aliaa08 @sonakshisinha @MadhuriDixit @abhivarman @ipritamofficial @karanjohar #SajidNadiadwala @apoorvamehta18 @foxstarhindi @DharmaMovies @NGEMovies”.

On the poster, Varun is fighting a bull and the still immediately reminded us of Rana Daggubati’s character Bhallaladeva from Baahubali who had a bullfight scene.