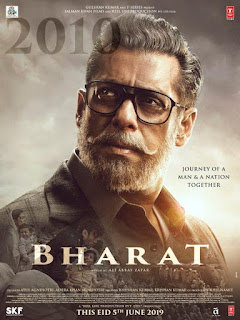 Film Bharat starring Salman Khan and Katrina Kaif in the lead roles is one of the much-waited releases of the year. Salman Khan will be seen in different looks in the Ali Abbas Zafar-directed movie. The megastar plays various looks right from a child to an old man. The makers of the movie disclosed the much anticipated new look from the film featuring Salman Khan. Salman Khan also took to twitter to share the new look and wrote, “Jitne safed baal mere sar aur dhaadi mein hain, usse kahin zyada rangeen meri zindagi rahi hain! #Bharat.”
Bharat is scheduled for Eid 2019 release i.e. June 5th.

Sonam K Ahuja to reveal about Kareena not being on social media!