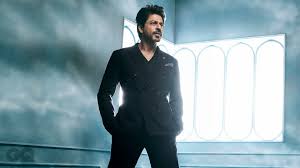 Shah Rukh Khan reveals a list of his favourite films!

As we know, Shah Rukh Khan is a powerhouse of talent and with every film, he proves that there is and will only be one SRK.
Lately, Shah Rukh was in China to attend the screening of Aanand L. Rai’s Zero at the closing of 9th Beijing International Film Festival and an overwhelmed SRK had taken to Twitter to express a sense of gratitude towards the love that he received from China. Along with a photograph of a banner that was specially made for his welcome, SRK posted, “What a warm and happy welcome here in China by SRK UNIVERSE China. Thx for the gifts, the flowers and the kisses. I am Red all over!!”
During a media chat, when asked which of his films he likes the most, SRK revealed, “I like them all, I like them that’s why I do them but to start with, Kabhi Haan Kabhie Na, Baazigar was very good, Daar was very nice, Kuch Kuch Hota Hain, Dilwale Dulhani Le Jaayenge, Chak De, Devdas, Swades, Chennai Express (I found it very funny), Fan, Raees, I must have missed a few but all these films I really enjoyed doing.”
Letely, Shah Rukh Khan was in London as he was awarded with an honorary doctorate in Philanthropy by The University of Law, London.

Shah Rukh Khan reveals a list of his favourite films!