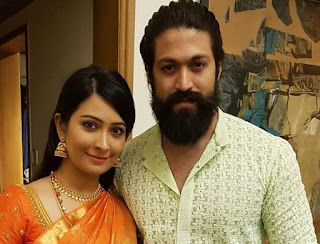 KGF star Yash and his wife Radhika Pandit to play from real to reel again!

After the remarkable success of KGF: Chapter 1, Kannada star Yash has teamed up with his wife Radhika Pandit for a movie. The pair will lend their voice to the lead pair of the forthcoming movie Girmit. Ravi Basrur is directing the film and will be composing music for the movie as well. Girmit will showcase a commercial story with an all children cast. While Yash and Radhika will lend their voices, actor Puneeth Rajkumar has sung one of the songs for the movie.
Director Ravi disclosed, “This film will have children playing all the roles, even though they are all grown up characters. And, to lend a twist to it, we have established stars and actors lending their voice to these characters.”
The movie is presently in the dubbing process.

KGF star Yash and his wife Radhika Pandit to play from real to reel again!

Are Ranbir and Alia planning of secret wedding at Lake Como?

Tamannaah Bhatia to become a poet for love!

PALOMA MONNAPPA THE MAKE UP BEAUTY