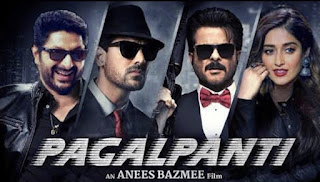 Pagalpanti 2 also on the cards!

Pagalpanti is still being filmed as we speak but that hasn’t stopped Anees Bazmee from going ahead and announcing a sequel to the comedy.
It seems the John Abraham, Anil Kapoor, Arshad Warsi, Ileana D’Cruz, Pulkit Samrat and Urvashi Rautela-starrer is turning out so well that its producers have green lit his plan to turn it into a franchise. Anees already has a team of writers working on a script for Pagalpanti 2, which will go into production in early 2020. Let’s hope he isn’t being overly optimistic and jumping the gun!

Pagalpanti 2 also on the cards!

MODELS AND ACTRESS IN SAREES