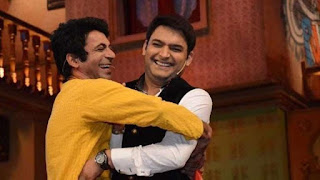 No comeback for Sunil Grover on Kapil Sharma’s show!

Every time we talk about The Kapil Sharma Show, one thing that instantaneously strikes everybody is the infamous fight that took place between Sunil Grover and Kapil Sharma after which, Sunil Grover walked out of the show. Although on various times, Kapil Sharma has asked Sunil Grover to come back to the show but Sunil Grover didn’t pay heed.
While Bharat is scheduled to hit the screens on June 5, 2019, the cast of the film is busy promoting the movie and during a latest media chat, Sunil Grover was asked about being part of Kapil Sharma’s Show and whether Salman Khan had asked him to return to the show, to which, Sunil Grover had told, “I had a brief talk with Salman sir about coming on the show. He just suggested it, never enforced anything,” further adding, “If I’m not in it, I don’t watch it.”
Beside Sunil Grover, Bharat stars Salman Khan, Katrina Kaif, Disha Patani, Tabu and Jackie Shroff in lead roles and the film is directed by Ali Abbas Zafar.

No comeback for Sunil Grover on Kapil Sharma’s show!

Hollywood star Keanu Reeves’ epic reply to what happens after we die!