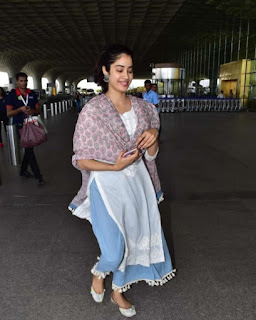 Janhvi Kapoor in Lucknow for shooting of her next film!

Recently, Janhvi Kapoor brightened up the internet when she was clicked at the Mumbai airport channeling the Indian girl in her as she was seen wearing white kurta paired with blue palazzos and printed dupatta and as always, she made for a beautiful photograph.
After making her Bollywood debut with Dhadak, Janhvi Kapoor has begun shooting for her next movie which is tentatively titled Kargil Girl and the film is based on the life of an Indian Air Force pilot Gunjan Saxena, who was the first ever Indian woman to fly into a combat zone. For all those who don’t know, Gunjan Saxena had evacuated injured soldiers in the 1999 Kargil War and she was later honoured with the Shaurya Chakra.
In the movie, while Janhvi will be playing the role of Gunjan Saxena, Pankaj Tripathi will be playing the role of Janhvi’s father.

Janhvi Kapoor in Lucknow for shooting of her next film!

Tulisa Contostavlos at Capital and Global Radio in London…

Jacqueline liked the Jodi of Salman-Aishwarya on silver…

HORROR AND SEXY STILL OF TRISHA