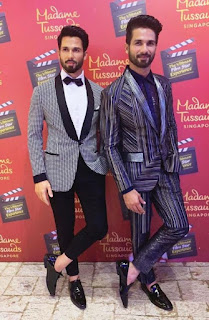 Lately, Shahid Kapoor and wife Mira Rajput, along with their kids- Misha and Zain, were clicked at the Mumbai airport as they jetted off to Singapore to uncover Shahid’s wax statue at Madame Tussauds.
In the morning, Shahid Kapoor took to social media to unveil a picture of his wax statue and while posing along with the statue, Shahid’s caption read, “#twinning.”
Soon after, all of Shahid admirers were all admirations for the wax statue. While some fans wrote, ‘Killer model’, others wrote, ‘Superb bro,’ ‘Woaaaah!! This is the closest I’ve seen a wax image! I swear I can’t make out which one is the real you.’