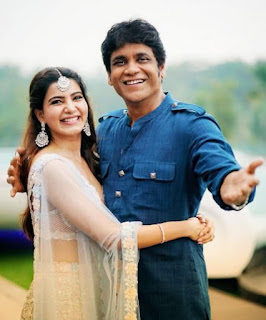 After the success of Majili, Samantha Akkineni began shooting for her cameo role in Nagarjuna and Rakul Preet Singh starrer Manmadhudu 2. Samantha will be essaying a very key role in father-in-law Nagarjuna Akkineni’s movie.  The actress will be essaying a very interesting role and is said to be a turning point in Manmadhudu 2. In the meantime, Nagarjuna has shared a loveable photograph with Samantha that sees the actress holding umbrella and is all happy.
Nagarjuna took to twitter and posted a lovely photo of him with Samantha from the sets of Manmadhudu 2 and expressed his happiness of working with the actress. He posted, “It was an absolute delight shooting with kodala pilla @Samanthaprabhu2 for #manmadhudu2 so much fun!!!! More pics on the way #Manmadhudu2diaries @23_rahulr @Viacom18movies @AnnapurnaStdios @AnandiArtsOffl (sic).”
The Majili actress who is happy being a part of Nagarjuna’s movie, responded,  I am so so happy that I could play a small part in #manmadhudu2 … so much positivity surrounding this project and this team .. I am supremely confident that this ones a winner @23_rahulr @Rakulpreet @vennelakishore (sic)”

Jennifer Lopez and Malaika Arora to unite for global yoga!

Ranveer Singh’s happiness due to happy ending with wife…

Salman to reveal about not to back Akshay Kumar starrer…