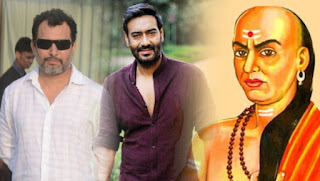 For months Neeraj Pandey has been researching Chanakya’s life for a new project about the renowned scholar.
As it turns out, his research unearthed such good material that he’s now decided to make the film as a two-parter. The big budget film that goes on floors later this year will star Ajay Devgn as the protagonist role and what’s really interesting is that instead of being a biopic, it’ll actually be a modern day socio-political drama based on the life and teachings of Chanakya. That’s a real kahani mein twist!

Madhuri Dixit to advocate for safe environment for women everywhere!

Hrithik Roshan to share a snap of his batch of students in Super 30!

Joe Jonas is spotted with green hair in LA

Alia Bhatt Sizzles her ass off in Bikini for VOGUE Magazine…