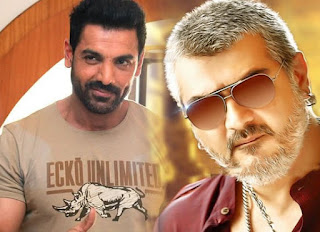 John Abraham to depict Ajith Thala’s role of Vedalam in a Hindi remake?

South superstar Ajith Kumar aka Thala is one of the famous actors from the Tamil movie industry. Now, Ajith is all set to captivate the viewers with Nerkonda Paarvai. As we know, Thala Ajith’s film Veeram is already getting a remake and the same will feature none other than Vicky Kaushal. As per reports LOL: Land of Lungi is the title of the movie and earlier reports suggested that Akshay Kumar was supposed to star in the same.
The movie apparently will be bankrolled by Sajid Nadiadwala and directed by Farhad Samji.
As per a latest report in a daily, Bhushan Kumar is keen to remake Thala Ajith’s Vedalam. And now reports suggest that John Abraham has been roped in to essay the titular role in the same. Ramesh Bala, who is a Kollywood industry tracker, took to Twitter to share the news.
He posted,” #Thala #Ajith movies are hot in demand in #Bollywood remake circuit.. After #VickyKaushal taking up #Veeram Hindi remake, Actor #JohnAbraham to do #Vedalam Hindi remake..”

John Abraham to depict Ajith Thala’s role of Vedalam in a Hindi remake?

Samantha Ruth Prabhu in a strange designer dress with a sexy…