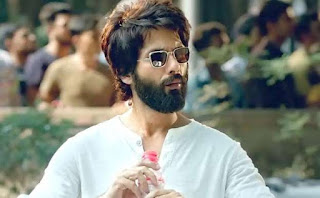 Shahid Kapoor opens up about like or dislike of audiences for Kabir Singh!

Bollywood star Shahid Kapoor’s newest release Kabir Singh earned more than Rs 200 crores at the box office. The movie is helmed by Sandeep Vanga Reddy and also stars Kiara Advani in the main role. While some people loved the movie, numerous didn’t like the toxic and violent depiction of the lead hero in it.
In a media chat, Shahid Kapoor was enquired about his character. Shahid told that his job as an actor is to depict a character and it’s the audience’s discretion to like or dislike him for all the character’s good. He further added that he never plays himself in the movies and everyone knows who he is. He is a vegetarian and doesn’t drink and is married and has kids.
About the film’s success, Shahid told that he has been in the industry for 15 years, but this is something so phenomenal to him that he is still absorbing it. He added that he is at a place in his career where he is happy to take his time.

Shahid Kapoor opens up about like or dislike of audiences for Kabir Singh!

Chunky Panday to get emotional on seeing daughter Ananya…