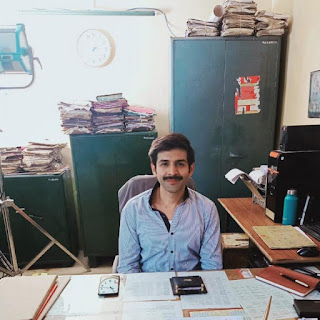 Kartik Aaryan to become emotional with the first look of Pati Patni Aur Who!

As we know, Kartik Aaryan is shooting in Lucknow for the remake of Pati Patni Aur Woh along with Bhumi Pednekar and Ananya Panday. Earlier, a photo of Kartik Aaryan standing on a ledge was leaked on social media.
Now, Kartik shared a photo of himself aka Chintu Tyagi on social media wherein he is seen sporting a mustache and along with the photo, Kartik posted, “#ChintuTyagi Leaving behind one character… his world and getting into another character is painful yet a fun process. That’s the perk of being an actor. You get to live so many lives in one life. #PatiPatniAurWoh.”
In this photograph, Kartik Aaryan is nailing his mustachioed, ordinary government official look as he is seen sitting behind a government office desk dressed in a simple blue shirt.

Kartik Aaryan to become emotional with the first look of Pati Patni Aur Who!