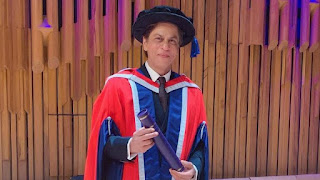 SRK to receive an honorary doctorate from La Trobe University!

Recently, the official Twitter account of the La Trobe University shared a string of photos of Shah Rukh and excerpts from his speech.
Shah Rukh has told that he has “experienced firsthand the superficiality of social values that place a woman’s appearance before her inner worth.”
The university’s Twitter account also shared his speech, where he told that the “this is not an award for anything the Meer Foundation might have achieved. It is for the courage of every woman who faces the brutality of injustice, inequality and inhumanity.”
“On the way to La trobe University… Thank you for the kind gesture of offering a scholarship to a girl student from India for higher education and supporting the work at Meer Foundation,” the 53-year-old SRK shared a photo of himself on twitter with this caption.

SRK to receive an honorary doctorate from La Trobe University!