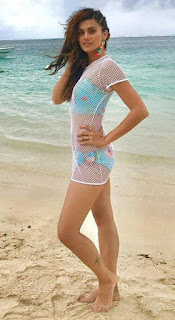 Taapsee Pannu is one of the most successful actresses in the industry nowadays. Now, Taapsee is gearing up for her next movie Mission Mangal with a bevy of leading stars like Vidya Balan, Akshay Kumar,Sonakshi Sinha, Kirti Kulhari and Nithya Menen. Actually, Taapsee who kick-started her Bollywood career with a commercial entertainer has not been part of many such commercial films.
In a latest media chat, Taapsee talked about how she is not being offered masala movies. Talking to a daily, Taapsee revealed that she had not been approached for any commercial film after the release of Judwaa 2, in which she was cast opposite Varun Dhawan. She revealed, “I also wish to do some light dance sequences in the films. Undeniably, I would love to be decked up and dressed up in lovely attire on the silver screen while performing in some commercial film.”
Taapsee added later, “But unfortunately after Judwaa 2, I have yet not received any offers to do commercial films. Though, I have no reason to complain as I have a few films keeping me busy.”

Sania Mirza Continues Golden Run each On and Off The Court