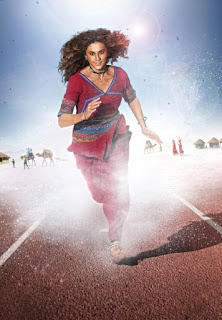 As we know that Taapsee has always won hearts with her performances in various films such as Pink, Mission Mangal, Soorma, Badla and others. In the next, Taapsee Pannu is going to try her hands at a role which she has never done before and that being, Taapse will be seen as an athlete in the film Rashmi Rocket.
Helmed by Akarsh Khurana, Rashmi Rocket is based in the salt marshes of Kutch, and the movie is about a young village girl, who is an amazingly fast runner. Fascinatingly, everyone in the village fondly calls her Rocket and when she gets a chance to showcase her talent professionally, she leaves no stone unturned and jumps at the opportunity. But, during her journey, Rashmi realizes that the race to the finish line is dotted with numerous hurdles. During her journey, Taapsee aka Rashmi faces challenges and the athletic contest for her turns into her personal battle for respect, honour, and even her very identity. As per media reports, Rashmi Rocket is not a sports person’s biopic but it is a human story that highlights misogyny in sports and the challenges faced by female athletes.
As per reports, Rashmi Rocket is based on an original story by Nanda Periyasamy and it will hit theatres early next year. The director of the movie, Akarsh opened up on the movie and how he met Taapsee and got her on board as he said that the birth of this project happened over two lovely lunches in Florence. “Taapsee was there for a film festival with Manmarziyaan and Mulk. I was at the same festival and we saw each other’s films, had some great food, and jammed over an idea that she had,” revealed Akarsh.