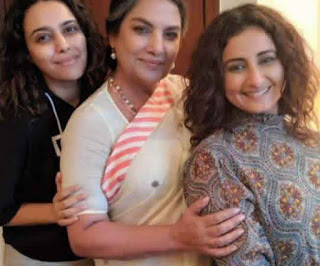 Veteran Shabana Azmi has always batted for the queer community.
The actress did Fire at a time when no one wanted to play gay, and now she’s also signed Faraz Arif Ansari’s Sheer Qorma. The lesbian drama will star Divya Dutta and Swara Bhaskar as a couple who want acceptance from their families and from society as a whole, and Shabana will play the role of Divya’s mom. The veteran actress was very moved by the script which highlights the LGBTQI community’s struggles, and didn’t hesitate to say yes. I know she’ll be her usual fantastic self in it!

No fear of getting older for Jennifer Lopez!

Wow, the power of women, tells Nicole Kidman on winning the…